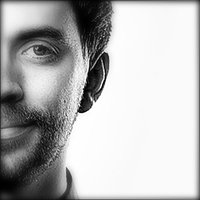 Master degree in ”Composing for film” at University College of Film, Radio, Television and Theatre (DRAMATISKA INSTITUTET), and Royal College of Music (KUNGLIGA MUSIKHÖGSKOLAN) in Stockholm.

This was the first time ever in Scandinavia that one was able to study filmmusic at a filmschool on a higher level. Here he had the opportunity to work together with the future filmmakers of Sweden: directors, producers, screenwriters, directors of photography, editors and sound designers.

Composition, orchestration and conducting at the University college of music in Piteå.

During that time he composed and orchestrated music to pop/rock-groups, small ensembles, big-bands, and symphony orchestra.

Composition and singing at the University of Framnäs.

During high school (between the age of 16-18) he studied music in Skellefteå. During his second year he began taking composition more seriously and spend a lot of time writing music inspired by different movies.